We arrived in Santiago, Chile. And thank you Higher Being, wherever you are, but I was eating normally again. We totally did the normal touring stuff, mixed in with a lot of family time (read: eating time). But we were a little concerned that I was starting to look “fat”. I’ll let you judge for yourself:

We got totally excited seeing this piece in La Moneda cultural center and talking about how we could get a Mexican carpenter to make us one:

It was kind of fun being a little smug in those days. M took a picture of this sticker on an old car in Valparaiso, and thinks we should get one like it:

It was also a little awkward. Not having any wine in a country that makes a lot of good wine. Not having a pisco sour toast. Being suddenly dis-interested in going out to sushi.

Luckily we were going with the fact that M’s family didn’t know me very well, and probably wouldn’t notice that this behavior was a bit out of the ordinary for me. And anyway, it was time to get on the road…

You know hormones? Well I’ve never been a very big fan of them, especially when they get out of control. You see the next 3 weeks, (weeks 11-13 if you’re trying to figure it out) I was a cranky, sensitive mess. I never really got the high end, no elation here. Just normal or some form of bad.

We spent the first week touring by car. And it rained a lot, and I don’t really like being in a small car on gravel roads for a lot of hours a day, with no music.

It was pretty dismal. And M still had to deal with my attitude problems. Because we were staying in cabins and I was freezing my butt off. And we had to cook our own food because there was no where to go out to eat. And I really don’t like cooking on vacation.

My poor guy tried so hard to make it a fun adventure: We got appetizers for dinner, your favorite! And I’ll do all the prep work! And you can have a non-alcoholic beer!

But I was a downer, even when I was kind-of having fun. Little did we know that the best was yet to come.

For some reason, I was set in my mind, that if you go to Chile, you have-to hike the Torres del Paine. Luckily M convinced me to book lodges so that we wouldn’t have to camp. But man, was it rough. We still carried around packs and I had NO energy.

Top that off with rain, wind that knocks you off your feet, and sleeping in bunk beds (when you have to get up to pee in the middle of the night) and it was a doozy.

Honestly, the only thing that kept me going, was getting to the next lodge so that we could be one day closers to done with the trek, so that we could GET OUT of THERE! That was my motivation. I was over the beauty, the nature, the adventure. All I wanted was some real (non-hiking) food and a comfy b&b bed. 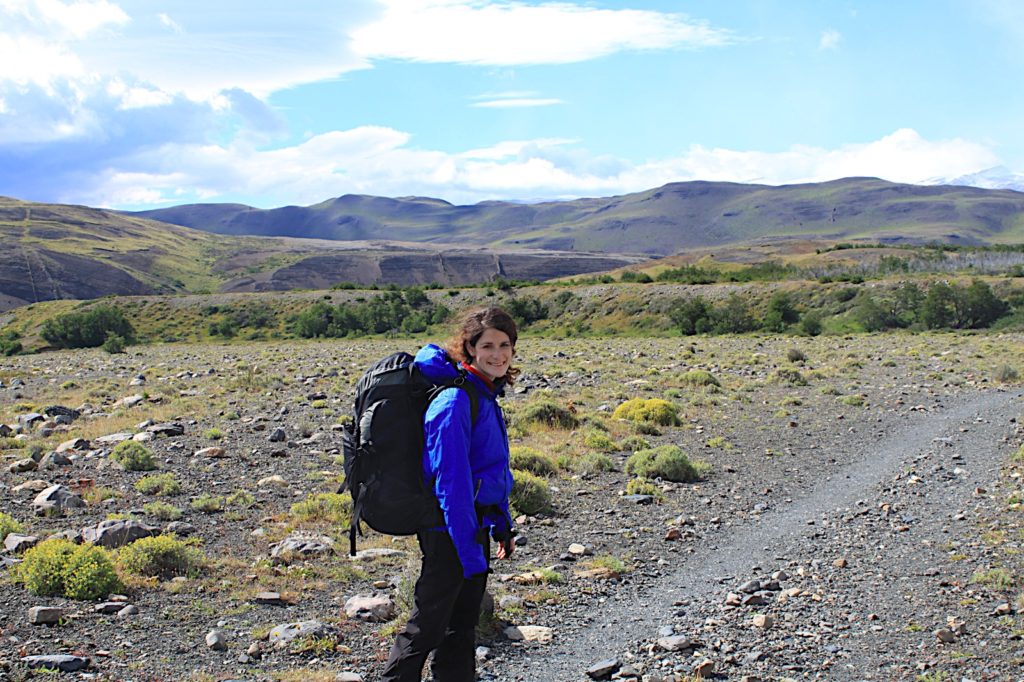 Don’t let the smile fool you…

The last few days after the trek were actually kind of fun. I mean, nothing could be as bad as that trek, so you know…Unfortunately my knees were a little ravaged so we didn’t get to hike as much as we hoped, but it wasn’t so bad. And the buses were ok, except for when I threw up at the end. But we were going back to the big city! Food and shopping and lounging on the computer in bed all day fun!!!

Tips for Travel in the First Trimester

In sum, I would say you can definitely plan some travel in the first trimester. However, stick to easy locations: lounging on the beach or walking around cities. Leave the hiking for another time.

There will be time to travel later on when you don’t feel sick or fatigued! You can travel with a baby, even a newborn.

If you have already booked a trip and find out you are pregnant, don’t cancel. However, do consider modifying your plans. Choose comfortable accommodations and research local safety considerations.

Second Time Around: The Second Trimester

Second Time Around: The Third Trimester

Second Time Around: The First Trimester