Baby Boy has been enthralled with us eating for a good long while now. Except a few weeks ago something changed: instead of being happy about our food, he became angry that he wasn’t getting any. Every time he was at the table with us, he would grab at our food and get mad that we wouldn’t let him eat it. So finally I decided to just dive right in. See how we got started with baby led weaning.

M and I eat a pretty healthy diet. I don’t follow any specific protocols, but I do have an intense aversion to food produced in a factory. Basically, if it comes from nature, or was made in the “olden-days” (i.e. can be made manually), I’ll eat it. Otherwise, I’m not a fan.

This means that we exclude a lot of processed goods- corn syrup, powdered soups, things made with milk solids instead of cheese, margarine etc. This is why I was so adamant about breastfeeding, and avoiding formula.

I make most of my parenting decisions intuitively, but I like if there’s research behind it. So of course when I came across the notion of Baby Led Weaning, I was all about it.

I do believe that children were made to feed themselves from the day they were born. Therefore, there’s no reason that we need to stop this process and begin feeding them once they are ready for solids. So I picked up the book to read up a little more.

As I was reading it, I had a lot of “duh” moments, which is good because the whole thing really made a lot of sense to me. In short, when a baby can sit up, pick up a piece of food, and put it in their mouths (plus eventually chew and swallow) then they are ready for solids, and can begin feeding themselves (in addition to milk feedings).

These abilities also coincide with the time at which a baby’s digestive system is ready to consume other foods. The book was a little wordy, but I’m glad to have it as a reference for ideas of what to feed Baby Boy.

Getting Started with Baby Led Weaning

I really liked the logic behind Baby Led Weaning, because if he can pick it up and chew it and swallow, well then I guess he’s ready. We started with a few dry runs.

Baby Boy sat with us while we ate: he got a spoon and a cup and sat in his high chair. Since that went well, I started giving him some food from my plate. Of course I didn’t have big enough pieces so he could barely pick them up, but he did.

Finally I made him some food, or rather, I gave him pieces he could manage, fully expecting him to lick/ taste and not really eat anything. I was wrong!

The next morning I was shocked to find out (via a dirty diaper) that Baby Boy had indeed ingested a fair amount of sweet potato! 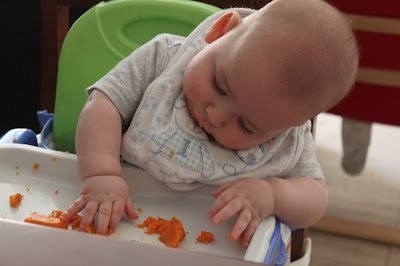 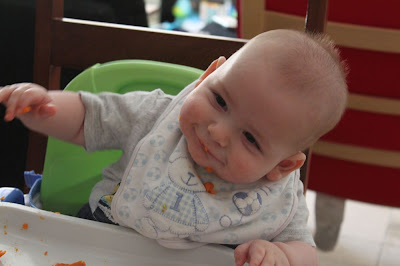 I should update that breastfeeding has gone very well since the last update. At three months, suddenly nursing became a 10 minute affair, which made everything much more manageable. I could nurse in the car, anywhere, anytime and my days were finally available for planning again.

Were you nervous about the weaning process? How did it go?

Update: Baby led weaning has gone really well for us, and I’m a fan!

Breastfeeding the Second Time Around and Tandem Nursing