Just before his six month birthday Baby Boy started eating solids. So far it has gone swimmingly well. As I outlined in the book review for Baby Led Weaning, we have become big fans of this method of weaning. There are probably three main differences that parents need to come to terms with when forgoing the traditional purées for this route.

1) You have to give up that image we all have in our head of spoon feeding our own little Gerber baby. (I think this is actually the hardest part at first!)

2) You have to let go of the expectation that your kid will eat a substantial amount right away. When purée fed babies are eating a full 1 oz, your kid might eat a quarter of a veggie stick, but that’s awesome. (I’ll get to why soon).

3) You have to trust your kid. By waiting 6 months to start solids, your baby has the physical strength to sit up (which is how adults eat too!). They can also pick up the food and put it in their mouth. Now you can help them develop the skills for eating solids. 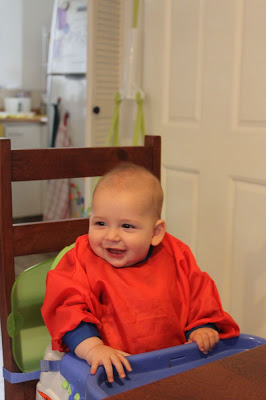 I think it all comes down to trusting our little kiddo to figure things out on his own. When we started, I would supervise like a hawk to make sure that Baby Boy wouldn’t choke. M has been pretty scared of this and doesn’t like to be in charge of meal time.

However, generally if Baby Boy has trouble with a piece of food it is usually a piece of fruit skin or something similar. He then gags a little until he can get it unstuck from the roof of his mouth and spit it out. I have only needed to stick my finger in his mouth a few times to help him out, and even this is generally premature. Now he actually closes his mouth tighter if he thinks I’m going in. It is his food after all.

So how did we do it?

For the first month we started with well cooked fruit and veggie sticks. This was pretty straight-forward. The main factor was to cook things well enough so that Baby Boy could mash them with his gums, but not too much otherwise they would fall apart in is hands before making it to his mouth. A little trial and error and I got this down.

Our second month I added some spoon feeding. I pre-load the spoon with oatmeal/soup and then hand it to Baby Boy. He grabs with his hands and puts it in his mouth. At first this was very messy, but now Baby Boy is a pro, and I think that soon he will be ready to start filling his own spoons. One key point is that I try to put the spoon right in the middle, so that Baby Boy can choose which hand he prefers to grab it with. 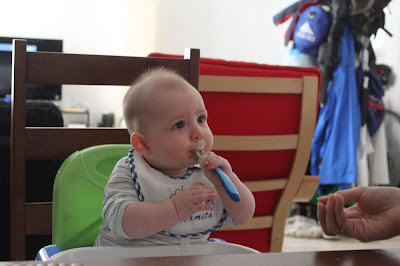 Our third month, I continued expanding our repertoire with some solid carbs: bread and pasta. Baby Boy loves these and has figured out how to gnaw them to obscurity, even though he has no teeth! 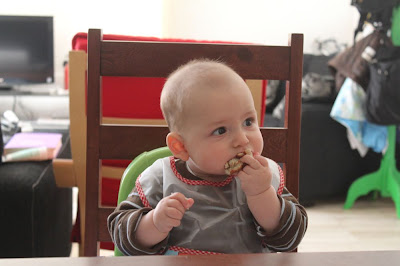 By our fourth month, Baby Boy had started picking up crumbs and small pieces, so I knew that he was ready for puffs. The kid LOVES his puffs and it’s amazing how well he handles them. 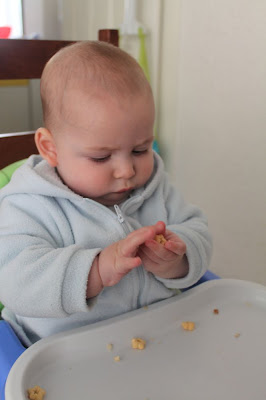 What about food allergies?

On the continuum of “introduce only one food at a time” (traditional weaning method) to “he can have anything at 6 months” (baby led weaning method), we fall somewhere in the middle.

Traditional weaning has you wait a few days before introducing new foods to check for allergic reaction. The reasoning is that if you start solids at 4 months, baby’s digestive system is not developed yet.

Those that follow baby led weaning to the T, would say that at 6 months baby can have anything because their digestive system IS developed.

To me, these are both extreme. Based on common sense, mostly, I didn’t think it was necessary to wait between introducing carrots and zucchini, for example. Both are non-allergenic foods.

I did wait a little longer with citrus for example because I saw that when he first ate them at 7 months he got a little red around the mouth; the acid was obviously irritating him. But at 8 months, we tried a piece again and he loved it and had no reaction.

Yes, baby’s digestive system is a lot MORE developed at 6 months than at 4 months, but it continues to develop afterward too, and there is no reason to rush into every last possible food.

For a couple of months I offered Baby Boy water in a sippy cup or straw cup with not much success. He would just play with the cup or chew on the straw without actually drinking anything. I finally just gave him his own little open cup and he quickly figured out how to pick it up with both hands and slurp up the water! 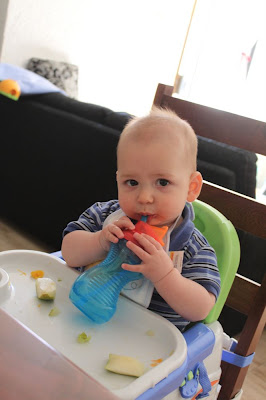 At this point Baby Boy still nurses about 5 times a day (and often once more in the middle of the night). After his solids meal, he will have a few sips of water, but nothing substantial yet.

Why do we love it?

1) Baby Boy has learned to eat food the way adults eat from the beginning. This means: picking up food, putting in mouth, biting off a manageable piece, chewing it, and finally swallowing. It is really remarkable to see him develop these skills at such a young age!

2) Going out to eat is SO SO EASY with Baby Boy. I can always find something on our plates to give him. I do try to make sure that what he gets is healthier though, so I might remove the batter from my fried fish before giving him some. 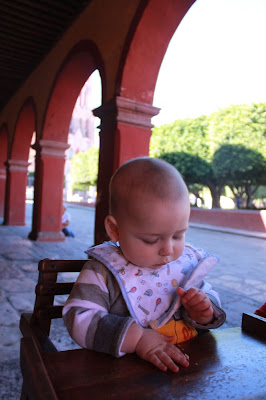 3) It’s a lot less work for me. I do not have to make special food for him and I do not have to deal with washing a blender all the time! While I do adapt some of our foods for him, usually I will just leave a portion out of whatever I am making for us before adding a no-no ingredient (such as nuts).

4) We can eat together, at the same time. Because Baby Boy is handling the food himself, I just need to manage the meal by re-filling his tray and keeping an eye on him. My hands are, mostly, available to eat my own food and that’s pretty nice.

And that concludes our solids manifesto. Kudos if you made it all the way through! Questions?