Today finally started on the right foot- we left Los Cuernos bright and early with renewed motivation for a good walking day. The trail had some hilly ascends and descends as we hiked by the impressive Lago Nordenskjold. At one point we made it to the shores of the lake and then ascended back, with views of the back of the cuernos, through the forested woods until we reached Campamento Italiano. At about that point, the clouds turned increasingly cloudy and a steady drizzle joined the party. We left our big bags, ready to take on the French Valley. As we started our way up- the drizzle drops only grew bigger and the huge cloud up ahead forebode limited views. So we cut our losses and returned to head towards Paine Grande. This section was even milder than before and the lack of wind made it an easier and quieter walk. It was, however, still a race against the drizzle as we walked along smallish Lago Skottsberg and into the cloudy hills. As we turned away from the lake, we were bombarded with bugs- harmless, but swarming and annoying. Just as we were going to take a break, we caught a glimpse of Lago Pehoe, where the next lodge was located. In a race against the growing drops, we made it to Paine Grande just in time before the real rain set in 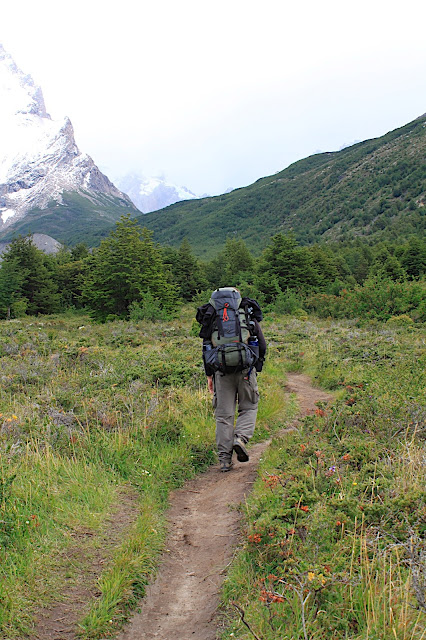