One of Guadalajara’s most famous buildings is the Hospicio Cabanas. If you haven’t been to see the mural masterpieces in the historic center of Guadalajara, then definitely head over there!

We’ve been to the Guadalajara Centro many times. This time was different. We finally made it to see the inside of Museo Hospicio Cabanas! And we had Baby N with us, that too. Here’s what you should know about visiting Hospicio Cabañas in Guadalajara!

The Hospicio Cabanas, also called the Museo Cabañas is a World Heritage Site! It was originally founded in 1791 by the Bishop of Guadalajara to serve as an orphanage and hospital.

The building is in a Neoclassical style and the open spaces with natural lighting and ventilation to specifically designed to promote healing! How cool is that?

In the early 20th century, the hospice was decorated with murals by José Clemente Orozco, one of Mexico’s most famous muralists. The murals depict both Spanish and indigenous Mexican culture. The dome of the chapel has a mural called El Hombre de Fuego (The Man of Fire) which represents the humans yielding to machines.

The Hospicio Cabanas were named for its founder Bishop Juan Ruiz de Cabañas. Currently it houses the Cabañas Cultural Institute.

Inside Hospicio Cabanas (murals by Orozco): 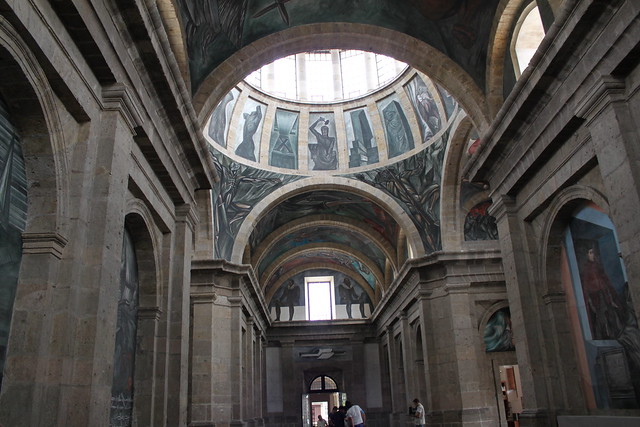 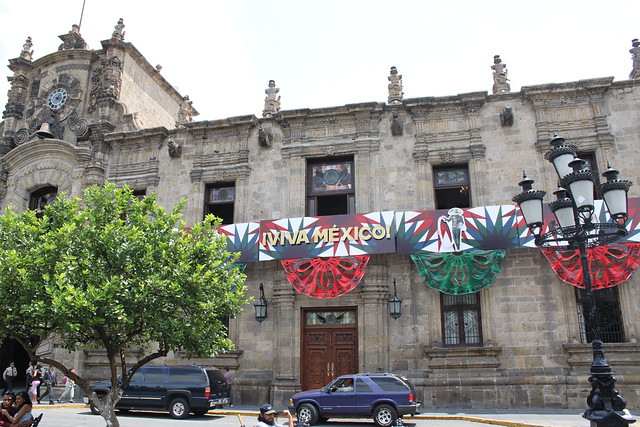 To Visit the Museo Cabañas

The Museo Cabañas is located on Cabañas street in downtown Guadalajara. You can easily get there walking from the Plaza de la Liberacion that is behind the Cathedral, by walking past the Teatro Degollado, and on the aptly called pedestrian street “Paseo Hospicio”.

Typically, the Museo Cabañas is open Tuesday to Sunday 11am to 5pm. Entrance for adults is around 80 pesos, (discounts for kids/students/elderly etc).

Guadalajara Centro Historico with a Baby

Overall our visit to Guadalajara Centro Historico was uneventful (in a good way), and baby spent most of the time sleeping in his stroller.

I figured out that once a day I can extend the time between feedings to 3-3.5 hours (instead of the usual 2-2.5) so we’ve been trying to take advantage of that to do some things outside the house without having to nurse in the car too often.

Also I noticed the centro is surprisingly stroller- friendly; the things you notice when you have kids…

Check out more Tours in Guadalajara!