When we last left off, Baby Boy had been moved to his own room and had miraculously stopped waking up for all but one feeding (that could be anytime between 1 and 5 a.m.).

Baby Sleep at One Year

At ten months Baby Boy dropped his final night feeding. It also more or less coincided with the time he began to eat three substantial meals a day of solids, so maybe that does have something to do with it. Then again he also became a crawling, cruising hurricaine so perhaps he was just zonked.

I have found that he needs to have a few very particular conditions met to keep this up: 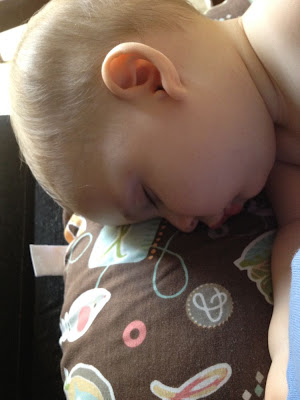 a rare occasion these days: catching a sleeping picture

If one of those is off, I end up having to get up for a night feeding. Other causes for night feedings include: teething, thirst (when it’s too hot), and milestones (like walking, ahem). Overall, though, I can’t complain too much about the last couple of months. Fingers crossed that this continues.

A note about napping:

My policy is not to fight about naps. I try to put Baby Boy down when I see his sleepy cues- slowing down, clumsiness, eye-rubbing, and whining. If I wait for a yawn, then it’s too late.

Currently he naps twice a day for 45 minutes, occasionally one of the naps will extend up to 1.5 hours, but never more.

He seems to regulate the sleep hours himself, and sleeps less at night when he naps more during the day and visa versa. If we’re out of the house, we just adjust as best we can.

How is your baby sleeping these days?

Project Move Out: How to Stop Cosleeping

If you find my articles useful, please use the links in the articles to plan your travels. Commissions earned from your clicks help to support this website, at no cost to you.