Skip to content
Baby Brother is our imitator extraordinaire. He is not an observer, he is a do-er. This week he decided to walk up the stairs, walk not crawl. Of course his short and chubby little toddler legs can’t really reach. So he stops and stands mid-stair and waits for us to help him, and of course we do because otherwise his erect little body would fall straight back.

Exposition number two: Little Boy is allowed to jump on the small crib size mattress. He’s also a little monkey so we figured it was safer to give him a designated spot than having him try to jump on the rest of our beds or couches where he is much higher off the ground. So now the little one gets on the bed, stands up and tries to jump! He obviously didn’t get the memo that that is a two year milestone.

And for the grand finale, the other day Little Boy was stacking pillows on the ground as part of his imaginary play. Then he decided to jump off his stack. We immediately put a stop to that since our tile floors are not conducive to that. Well low and behold Mr. Daredevil was watching and has now decided it is a great idea to try and pull pillows off the couch to stack, climb on, and attempt to slide off. Boys. 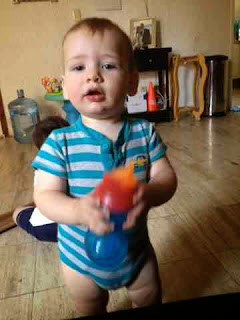