Today Baby Boy got a huge gash on his forehead. He was over it within 5 minutes. I am still not over it.

The story was nothing special. We were sitting on the outdoor patio of a coffee shop. Or rather, I was sitting, while Baby Boy was walking around the different tables and exploring. He made it a few feet away and was about to knock over a chair. As I ran over to stop the chair from falling on him, he turned away, tripped and landed smack on his forehead. He had hit the ledge of the patio and I instantly started searching his face for a bump. Sure enough a minute later the dent he got started bleeding. It was not by any means deep or serious. I did not freak out. But it was his biggest bump to date and a noticeable gash on his forehead. 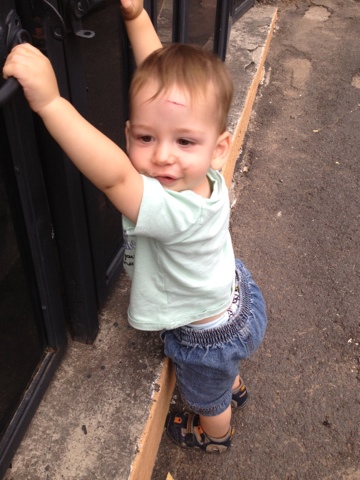 (later in the day, as if nothing had happened)

I started thinking about how I can remember every single time he has gotten hurt. At seven months another boy at a play group grabbed at his face and scraped off a piece of his perfectly soft baby skin. It took several weeks to completely disappear, and every time we were around that little boy I was extra vigilant. At eleven months, almost walking, he tripped and fell on his face. His new teeth cut his lip and he bled for the very first time. Since then he’s had a few forehead bruises and a few knee scrapes. It comes with the territory of toddlerdom.

Soon, however, I will not be able to remember all the bumps and bruises. Baby Boy is becoming more and more independent every day. He doesn’t like holding hands while exploring unless he is on a very steep hill. Inevitably he falls and I can’t be there to catch him. It’s difficult to let go of the mama bear hug, to let my little baby grow up and get injured along the way. I know that in the long run toddler bumps are nothing to be worried about, but I can’t help wanting to protect him from all harm, from anything that might hurt him even the slightest bit.

For today though, I’m just happy that a one inch gash is the worst of my worries. I hope it always stays that way.

What is a Super Mama?