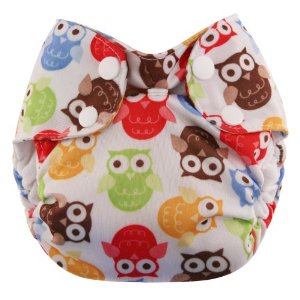 Planning to Use Cloth Diapers

Ok, so I thought I should share practically what I’m thinking of actually doing. I must say that M is still a bit hesitant, but we’re going over to some people’s house that cloth diaper and hopefully seeing them in person will take care of the final convincing (or totally backfire). We’ll see…

Anyway, after researching this topic to death, I think that I’d like to do this:

Disposables. Poor baby will still have umbilical cord, and circumcision scarring and we’ll definitely have a grandma or two around so I think we’ll just go with the main-stream manner.

After disposables run out- prefolds with covers. This seems like the easiest way to get a good fit, and it’s a lot a lot cheaper than fitteds. For such a short time, I don’t want to make a huge investment.

All in ones. I want to keep it simple. I KNOW that I don’t want to stuff diapers with liners. To me it’s kind of like folding socks or something, an annoying laundry related task and I just don’t want to deal with it. Plus once Baby Boy is older and more fidgety, something that only takes one step seems like a big advantage.

This is the current pick:
BumGenius Elemental All-in-Ones
and also one of these
Diaper Sprayer
and maybe some of these
Disposable liners

So then we went over to some new friend’s house for dinner, and it was awesome on many levels. Firstly, they were probably the coolest people we’ve met since being here (and it’s too bad that they’re leaving in just a few months).

Secondly, we have a lot in common: interests- wise, school- wise (for M), and baby-wise. Thirdly, they are just a few months ahead of us in all these aspects so it was a great great learning experience from people that have dealt with a newborn and haven’t had time to forget what it’s like.

Amongst other things, we got to talking about cloth diapers, and they are the first people we actually know in real life that are using them. They are totally doing prefolds all the way through, more specifically the Econobum system. So it definitely got me re-thinking what we should do and get.

And I’ve changed my mind a little, but totally for the better. With this trip coming up I decided to only get prefolds. I know that we will be visiting the States at around the 2-3 month mark for Baby Boy, and at that point I can bring the all-in-ones if I still covet them like I do now.

I’m hoping that these will suffice nicely until the three month mark, and some of them should go on to almost 6 months, so that should give me time to evaluate how things are going. Also, this is going to be inexpensive, (to the tune of less than 200 USD, which is less than we would spend on disposables for that amount of time here), and lets me spread out the costs a bit to next semester.

The other thing I realized is that we really should just start doing the cloth from day 1, or as soon as the meconium has passed, so that we get used to it and that’s just it.

Are you planning to use cloth diapers?

Cloth Diapering: Basics and My Recommendations

Registry for a Second Baby